Welcome to the World of Rent 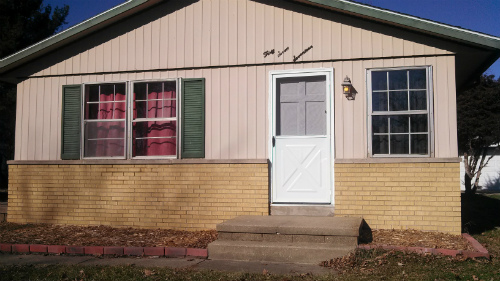 How would you like to live here? Too bad, it’s already rented!

As of January 16, Dan and I are the proud owners of our first rental home and even in just a week we are starting to get a picture of the ups and downs involved. On the upside, we already have most of the repairs finished that we wanted done before having a tenant moved in. We were also pleasantly surprised by the great response we had to our Craigslist ad. Within 2 hours of first posting the ad, we already had people calling and filling out rental applications online. In fact, we had 10 showings in the first 3 days which was enough to find multiple candidates that we were fairly confident in renting to.

One of the candidates seemed like a great fit for us. She was an elderly retired woman (let’s call her Mary, not her real name of course) with two handicapped grandchildren that she cared for and received monthly payments from the government on their behalf, in addition to a decent pension. Mary also had lived in her last two locations for almost 10 years each, which sounded pretty darn good to us. Older woman with guaranteed income and longevity? Perfect! We let her know that pending a reference and credit check we would be interested in moving forward with her application.

During the course of our research into becoming landlords, multiple individuals recommended to us that previous landlord references were one of the crucial screening calls to make. With this in mind, we prepared to make a few phone calls. We noticed that Mary hadn’t written down her past landlord’s number, so we gave her a quick call to which she responded that she didn’t have it on her but she would call us right back with it. After waiting a couple of hours and not hearing back, Dan decided to try to find the number himself using her listed address. Luckily, he found a full listing provide by the city housing authority of all of the owner/property managers for each rental unit including name and phone number. However, we needed to call Mary back anyway to get a few more pieces of information and this time she gave us her landlord’s number herself.

We called the landlord with the number she provided and he gave her a raving review. Never late on payments, grandkids don’t cause any problems, just everything perfect. However, there were a couple of discrepancies that didn’t quite pass the stink test. First, Mary had written on her application that she paid $525/mth at her current address and the landlord said $1200. Second, she claimed that her reason for leaving was that the landlord was selling the property but the landlord was very emphatic that they didn’t know she was moving and how disappointed they were in losing her. Finally, the name and number of the landlord didn’t match what was on the city spreadsheet as the legal contact, and the number was only 1 digit different from her personal number (which also happened to be from a different area code then the local one). We had Dan’s brother double check the owner of the cell phone number – he works for a local cell distributor – and found that Mary was the owner of the account.

Now I’m usually a pretty relaxed person and don’t get angry too easily, but this situation really rubbed me the wrong way. I mean, seriously? You’re going to give me a fake phone number and have your family lie to a prospective landlord? We don’t know why she lied to us, whether she didn’t have the other landlord’s number or was intentionally hiding problems she was having, but to us it doesn’t matter. She will not be living in our house under any circumstances. Luckily, we had a second choice tenant whose credit check showed exactly what she told us it should and her landlord’s name and number matched the spreadsheet and also happened to be a former mayor. Somewhat more legit.

It is easy to see how people who own businesses can become cynical very quickly. Most people just want to do the right thing, but some really are trying to take advantage of you. The important thing is having a healthy balance of faith and skepticism about other people, so hopefully you can determine which is which. And remember, if it stinks…it’s probably fishy.