This Isn’t Going to be Easy 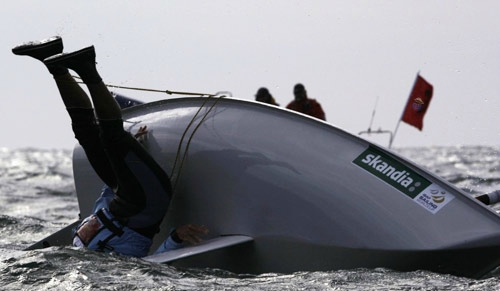 After our second time sailing on the MacGregor, Michele and I decided to invite my youngest brother Alex, his girlfriend Stephanie, and my parents along for the ride. It was a bad idea. I guess after our second voyage I was pretty confident and felt that while I had not mastered sailing (if one can even “master” sailing) but I had at least established a foundation upon which to build. The wind was a steady 10-15 knots and gusting above 20… again a bad idea for trip number three. We had learned from our previous experiences when the river drops enough to lower the keel, when it was best to raise the main, etc. All in around 5-10 knots of wind. Not 10-15.

We raised the main too early. By “too early” I mean we weren’t yet in the channel and we couldn’t yet fully lower the keel… again a bad idea. This left us with two choices #1 sail with the keel not lowered far enough or sail with the keel dragging. We decided on not lowered far enough. This allowed us to at least move the boat into the channel at which point we would be able to lower the keel and point to wind. However, perhaps a little to leery of repeating my first sailing adventure, I did not want to go with the wind past the marina as we did in the first voyage. Again, a bad idea. Forcing the boat into the wind with the keel not in the correct position caused the high (for me) wind to push the boat down wind even though we were pointed around 60 degrees off wind. So at this point I have my parents, younger brother and girlfriend, wife, and baby on a boat that is pointed one way yet going another. Enough is enough, I am not too prideful to admit that I am not yet experienced enough to attempt the current circumstances. I decided to cut my losses and return to the marina.

We lower the mainsail and begin (electric) motoring back to the marina. At this point the wind begins blowing at a steady 20 knots. At least I made the decision prior to the wind picking up, right? Now all I have to deal with is a light boat that drafts 11 inches bobbing in 3 feet of water (can’t lower the keel) that is broadside to 20 knots of wind. With a trolling motor. Needless to say direction the bow was pointed had much less to do with the direction of travel than the force of the wind on the side of the boat. Even though we were motoring significantly windward of the marina entrance we ended up 500 or so feet down wind of the entrance. The little motor, while perfect once we are in the marina, was not capable of making headway against the wind. Dismayed, I turned the boat down wind and stopped at the free city boat launches about a quarter mile down river from our marina. The free boat launch lacks most things you would think are necessary at a boat launch… like a dock to stop at so you can disembark and retrieve the trailer. It fell to myself to jump in the water and walk the boat to a safe spot while I walked back to the marina. While I was moving the boat to a safe spot I kicked an underwater rock and broke a toe on my left foot. So let me recap my situation at this point for you, just in case you have lost track of the dismal events… I am standing in three feet of cold, murky water with only a coat, life preserver, and boxer shorts on pulling a boat that is being pushed by the wind, and just broke my toe with my family watching on. Extremely embarrassing. And now I am sharing this story with you… also embarrassing. This pretty much sums up how I was feeling

I do not share this simply to embarrass myself. I share this story because it truly reminded me how different the cruising life will be from what I am used to. A more experienced sailor would have had no problems whatsoever in 10-15 knots of wind. Matter of fact we saw three other similarly sized boats sailing around. At the low point of the voyage (standing in the muck in my boxers) I couldn’t help but have a moment of introspection… What the hell was I doing?

No one but Michele and I are going to make our dream of cruising become a reality for us. I am acutely aware that there will be times when things won’t work out the way we expect, people will (and already do) think we are crazy, but we are following our dream. The purpose of buying a sailboat now was to learn to sail… and that’s what we’re doing. It’s not always going to be easy.