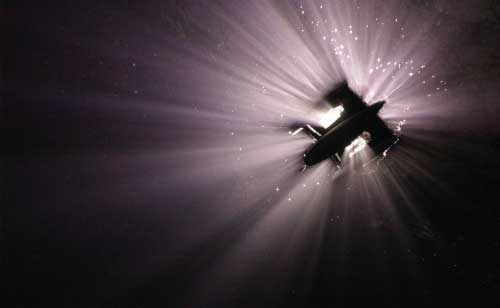 So recently, Dan and I found this fantastic sailing blog called Windtraveler, written by a couple from Chicago who is living the dream of sailing their boat Rasmus on the open seas. (Actually, they are currently back in Chicago for a pit stop while they have their baby girl, but that’s irrelevant to this particular post.) So anyway, I’ve been reading their blog from the beginning and found a post about the movie Deep Water about the Golden Globe solo circumnavigation race in 1969. Windtraveler highly recommended the movie as “gripping” and says “there is definitely a lesson to be learned from Donald Crowhurst, may he rest in peace.” Well, I’d say I learned about 2 main lessons from the movie:
1. Never, for any reason, allow your husband to sail the open ocean without you.
2. Ever.
I mean, seriously, I don’t think I have ever watched or heard or read of a story that was so devastatingly heart-breaking. I mean, you could not make up a story so tragic as the story of Donald Crowhurst. Not to beat down on Brittany from Windtraveler or anything, but you could have warned me that I am going to have separation anxiety from my husband for weeks now, clinging to him like a two year old who thinks his mommy is never going to come pick him up from day care. Why? you may ask. Well let me give you a little breakdown of the solo race around the world.
Of the nine contestants, 4 didn’t make it out of the Atlantic, 1 got just past the Cape of Good Hope and gave up after having 27 straight days of terrible weather, 1 got 1100 nautical miles from the end before sinking his boat, 1 decided he would rather leave his family in France and keep on going around the world*, 1 committed suicide after losing his mind, and 1 finished. Not a great outcome if you ask me.
The movie focused mostly on the experience of Donald Crowhurst. He was left in an absolutely tragic state of trying to decide between death by drowning and absolute financial and reputational ruin after his boat started taking on water in the beginning of the race, and in the end he chose both. Truly, though, the real lesson that I took from his story was this: there is nothing so tragic as losing your life because you are afraid of losing it. You have to face your problems head on, even if there is nothing scarier that you can think of doing, especially if you have someone you love who will face them with you. It is always better to stand with your family, rebuilding out of the rubble, than being alone in the end.
So there you go, maybe I did learn something from this terribly depressing movie. (But seriously, Dan is never going to do a solo circumnavigation now.)
*So I know a lot of people are inspired by the writing of Bernard Moitessier, but couldn’t he have just gone back for his wife and then gone to Tahiti? I mean, really.