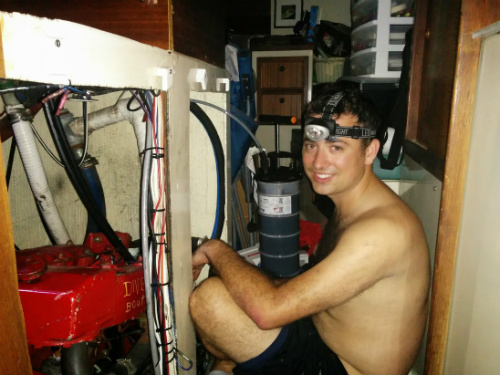 After hours in this position, I could barely stand up!

As part of the preparations for our upcoming cruise to the Abacos, I wanted to square away a few things in the engine room. First and foremost was to do the routine maintenance including changing the oil, oil filter, and fuel filters. I also wanted to add an hour meter to aid in keeping up on these critical maintenance tasks. Seems pretty straightforward, right?

Once the work began, however, it was anything but. Since the last oil change was my first on my new engine, I had hired a mechanic to show me the ropes. He had an issue with his oil extractor fitting down the dipstick tube and recommended I purchase one with a smaller tube. So, thinking I am prepared, with my narrow tubed oil extractor, I begin to suck the oil out of the pan. Unfortunately, the dipstick is located in a high spot of the oil pan and does not allow for the full extraction of the oil… it actually only allows around 1 quart to be exact. Not to be deterred, I located the actual oil drain plug and began awkwardly loosening the bolt while laying on my stomach with my hand behind my back (ok, not really, but if you’ve ever tried to work UNDER a boat engine, you understand the predicament). 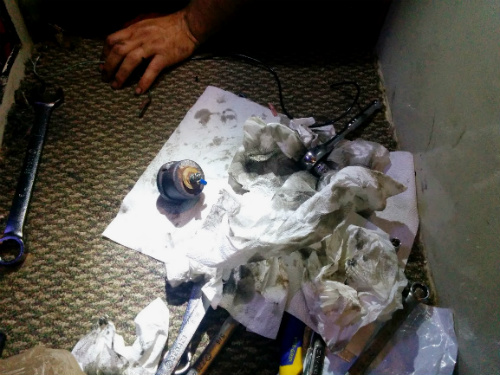 Two rolls of paper towels were sacrificed to the cause…

The plug came freely the first few turns and then essentially stopped. I fished out Michele’s old makeup mirror and held it under the engine to see what was impeding my progress to find out that the drain plug’s flange was rubbing against a bolt that holds the transmission to the engine block. After much finagling and squirming and consternation, the drain plug was freed and then the flange ground down to a more reasonable circumference that will allow it to freely be removed and replaced in the future. A drain plug gasket also ensures that the pesky oil seepage from the never-before-removed plug is now a thing of the past.

Thinking the worst is behind me, I unscrewed the old Sierra brand oil filter and lovingly tightened on my shiny new top-of-the-line-for-eight-times-the-price Napa Gold filter and refilled the oil reservoir with Delo 15w-40. Side note: there is much discussion online on which weight of oil and which brand to use etc… I went with the recommendation in the official Perkins service manual.

Thinking I am done, I fired up the engine and checked my exhaust first for flow (a habit) and then watched for oil pressure. I hadn’t refilled the rather large oil filter, so I knew it might take a few seconds to fill the filter and then pressurize the oil system so I wasn’t worried when I saw 0PSI to begin with. Around the 30 second mark I became worried, however. I soon realized that no oil was flowing and killed the engine.

The first thing I checked was for proper oil level in the reservoir and found that, indeed, it was full. I then moved on to checking for leaks around the oil filter or any hoses and found that everything looked as normal. Perplexed, I fired up the engine again to the same results after 60 seconds… Even more worried now, I disconnected the oil line feeding the remote oil cooler and had Michele crank the engine. Oil immediately squirted out of the line, to my relief. 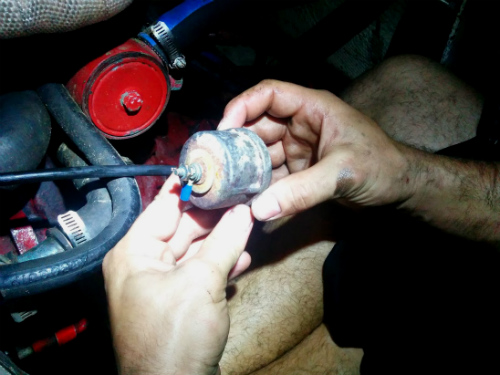 The oil sender looked quite corroded so we figured that must be the problem.

It was now appearing as though the oil was, in fact, flowing through the engine properly but I was getting an incorrect reading on my gauge or the oil pressure sender. A gaze at my sender let me know that it had likely given up the goose and a quick run to the boat bits store rectified that and the old oil gauge.

Fully expecting my issue to be resolved, I fired up the engine to 0PSI oil pressure yet again. Truly perplexed, I took a break from hands on work and began researching. Unfortunately there are an enormous amount of Perkins 4.108 variations, so this task is made significantly more difficult. My engine has also been customized with a remote oil filter kit (larger filter capacity) and oil cooler.

I tinkered around, tried different oil filters, different oil filter brands, etc all to no avail. Eventually I put the old filter back on out of curiosity and the pressure immediately went to normal! I couldn’t believe this… why would the old filter work and the Fram and Napa Gold filters not? Thinking it is a filter density issue, I researched the Sierra micron rating and found that it was in the same ballpark as my other two brands…

Totally dumbfounded, I ran the issue by my father and his immediate response was, “is the oil flowing in the correct direction through the filter?” I hadn’t thought about this despite having tried several other fixes. I swapped my oil supply and return lines on the side of the block and put my Fram filter back on. Immediately upon firing up the engine my normal oil pressure returned! The oil had been running through the filter backwards! The older Sierra filter from the previous owner worked with this scenario because it didn’t have an internal check valve to prevent it from draining while the engine is off. Both my Fram and Napa Gold filters had this valve, with a side effect of only allowing the oil to flow in one direction.

So, several hours and a full day after beginning, my pre-trip engine maintenance is completed. Oil is flowing in the correct direction and all is right with the world.

Hopefully the knowledge gained and changes made to the drain plug (and oil flow) will make future oil changes take significantly less time than the significant investment this process took.