Another lesson to add to our last list: water and electronics don’t mix! Due to a combination of my phone getting a salt bath and us being out of Wi-Fi and cell phone range for a few days, we’ve learned what incognito really means. Luckily, we’ve had plenty to occupy our time and attention with the last two weeks in the Exuma Island chain. Our first anchorage in the Exuma Cays

Our journey from Rose Island to Allen’s Cay went straight through the Yellow Banks, an area dotted thickly with shallow coral heads. For a little over an hour, I was at the bow having my first experience with visual piloting. Dan was watching the charts while I was continuously scanning the water for any dark areas ahead. The water here is so clear that it is quite obvious to see large coral heads or rocks that may be of danger to our boat, but only as long as the sun is above/behind you and the clouds aren’t shadowing the water. It is quite nerve wracking when a cloud passes over an area and suddenly the water is a solid gray. I was rewarded for my diligence by a pair of dolphins playing underneath me just as we passed out of the dangerous zone (and with an undamaged boat of course!) 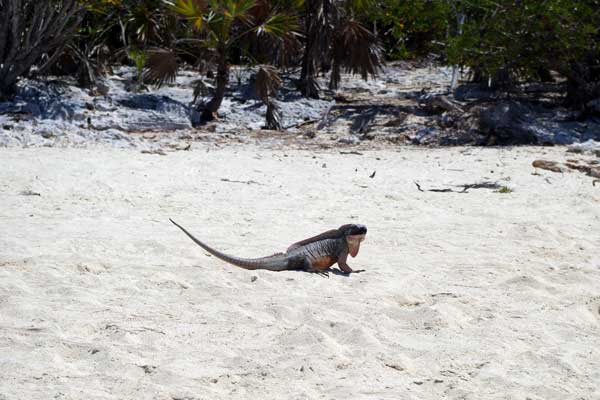 This iguana was standing sentry for the rest. 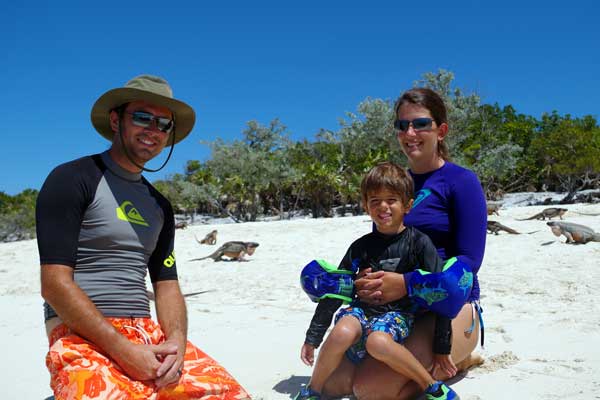 He called out all of his bodies once we got to the beach.

We spent our first two nights in Allen’s and Highbourne Cays where we got to spend some time with the famous iguanas. As we pulled into the anchorage, there was one iguana standing sentry in the middle of the beach but as soon as dinghies starting pulling up they starting appearing everywhere! Nearly 100 iguanas swarmed onto the beach, waiting for the handouts they’ve obviously been conditioned to expect. We kept our distance, but the iguanas certainly were not shy at all! 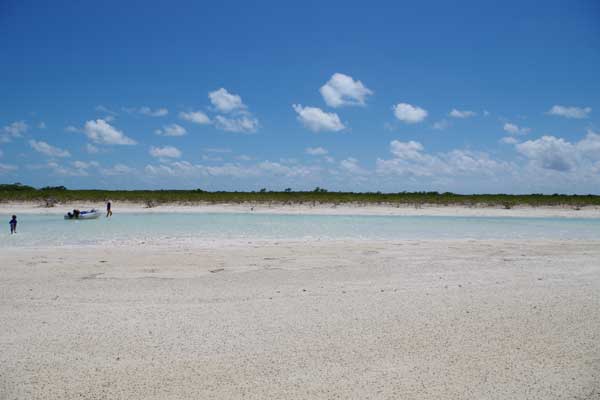 Even with having to pull the dinghy, the scenery made up for it and then some! 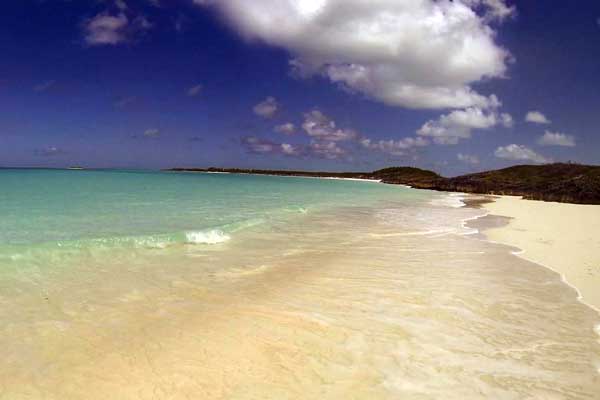 The most beautiful beach of our trip so far.

From Higbourne we journeyed into the Exuma Cays Land and Sea Park, with our first stop being Shroud Cay. Shroud Cay is essentially a ring of solid land surrounding a huge mangrove field with two creeks running through the middle. We decided to journey by dinghy on the northern creek to the Exuma Sound on the east side of the island. What we didn’t realize was we should’ve gone around high tide, so Dan and I got to play barge mules whenever the creek got too shallow to drive our dinghy. Never the less, it was one of the most beautiful hikes we’ve ever done and the beach at the end of the hike was by far the most beautiful we’ve seen so far in the Bahamas. Next, we moved on to Warderick Wells which is the home to the park office and another beautiful destination. We hiked Boo Boo Hill, where the legend says the ghosts of a shipwreck still haunt. Boats leave a piece of driftwood with their name on the top of the hill and we left ours too. What we didn’t realize was how elaborate some of the decorations would be! The view from the top was spectacular but we were ready for a dip at the beach after a hot hike in the sun. You can see the whole crew swimming out for a taste. Carter was nervous about the pig biting his fingers!

Finally we made it to the famous Staniel Cay, home of the swimming pigs and Thunderball Grotto. We visited the pigs on our first day, not knowing exactly what to expect. As we pulled up in the dinghy, they saw us coming and starting swimming out to us, especially once they figured out that we had brought them some raw potatoes. The biggest pigs were so excited they were pushing into the side of our dinghy with their mouths open like baby birds! We decided not to even get out since we didn’t want Carter to get accidentally knocked down or stepped on by the over-excited hogs. Thunderball Grotto was a magical place! Most of the entrances are underwater at high tide.

Thus far in the trip, we hadn’t been able to convince Carter to try snorkeling with us. That all changed at Thunderball Grotto. The grotto was made famous by the James Bond movie Thunderball and is truly just as beautiful as the movie made it seem. We made sure to go at low slack tide so that Carter would have plenty of clearance into the low cave entrances and so we wouldn’t have to fight the strong current that runs through. When you come into the cave, it is amazing to see the shafts of light shooting down into the amazingly clear water filled with fish and colorful coral and sponges. Carter loved it so much, he immediately started asking us when we would come back again. At the time, we didn’t think we would but he got his wish the next time we came back through. Everyone in cruising talks about the steep learning curve involved when you first start. Dan and I can certainly attest to that and the stress that goes along with the uncertainty of moving your house and all your worldly possessions across an expanse of water. While we are definitely not what we would call seasoned, we have gotten into more of a rhythm after a few weeks of traveling thanks in part to some first-hand lessons we’d like to share:

What lessons did you have to learn the hard way?