Categories Menu
Home » Preparation Stage » Lessons from a Near Knockdown

Lessons from a Near Knockdown

We crossed paths with another fellow marina resident on the way out who took this picture for us.

This weekend some new friends of ours from the marina offered to go out sailing with us on our boat for the first time. Since we hadn’t taken Horizon out yet on our own, we were a little nervous to go by ourselves and so we gratefully accepted and made preparations to head out on Sunday morning. Craig and Lisa own a sister ship to the one from Captain Ron, a favorite sailing comedy from the 90s, a Formosa 51 named Windborn. With their added experience of sailing a large ketch and knowledge of the many bridges in our path to the West Palm Beach inlet, we were confident that we would all have a great time and learn a few lessons along the way.

Lesson #1: We need to move closer to a sailing inlet if we are going to get any good practice. The motor trip from our current marina to the inlet requires us to wait for 3 bridge openings, which sounds like no big deal until you realize that each bridge only opens every half hour. The one way trip to the ocean takes somewhere in the range of about 2 hours of motoring, all of which is very noisy due to our lack of sufficient sound insulation in the engine compartment. The insulation will be moving up on our list of priorities after a day of motoring on the ICW.

Lesson #2: Check the functioning of the swing keel before you get to the ocean. Once out of the relative shallows of the channel and out on the ocean, we started raising the sails for the first time. They all look in great shape as expected and were fairly easy to handle due to the rigging upgrades that we done to the boat before we bought it, not the least of which being a nice Mack-pack and lazy jacks system for the mainsail and mizzen. These allow the sail to easily come in and out of the sail cover when needed. As soon as we got the sails up however, we realized that we needed to lower the swing keel to give us more stability under sail (a.k.a. not tip over). Unfortunately, we quickly figured out that our swing keel was not going to budge. We aren’t sure yet whether there is a lock on it somewhere that we haven’t found or its somehow impeded underwater, but for our first trip it was completely out of commission. That meant we weren’t going to be doing as serious sailing yesterday, but we figured that we’d have some lunch on the water, have a good time and then head back to the marina. 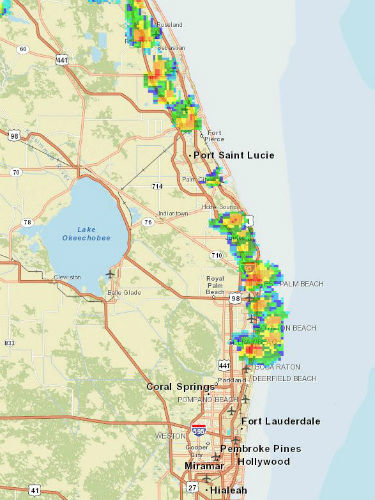 The radar went from perfectly clear to this before you could say “Holy Thunderstorms, Batman!” We were right about where the map says Palm Beach when we got hit.

Lesson #3: Keep an eye on the weather. Dan and Craig had both checked the forecast before we cast off in the morning, but nothing had indicated the storms that we ended up trying to avoid all afternoon. Though the radar had looked perfectly clear with simple afternoon showers expected, not long after getting out onto the ocean a huge line of storms developed directly over the ICW stretching from Boca Raton all the way up to Jacksonville. While we didn’t get directly hit by any of the thunderstorms, we did get surprised by the strong outflow winds of one of the storm cells. The wind picked up very quickly from 6-8 knots up to a gust of 30 knots, catching us unaware and nearly knocking us flat on our starboard rail. It was literally the scariest thing that has ever happened to Dan and I, but luckily no one got hurt and the boat wasn’t damaged in the process. We now understand better the precautions that the cruising community takes in advocating a “reef early” standpoint when it comes to approaching weather. We certainly would never want to get caught with too much sail up again. 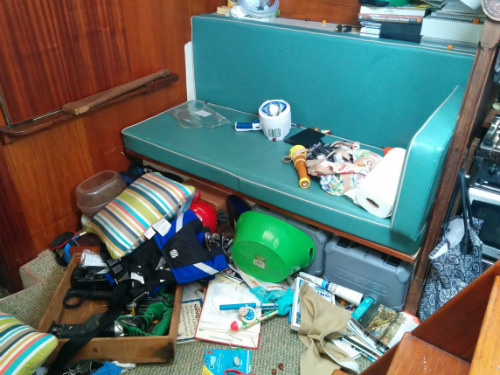 Its a good thing everyone was in the cockpit when this happened!

Lesson #4: Knock-down proof your interior. During our near-capsize, we were treated to the noise of crashing objects below. Drawers fell out, cabinets fell open, and pretty much anything not properly secured on the port side ended up in a heap on our salon floor. Luckily, nothing was seriously damaged and our dogs were smart enough to keep themselves out of the melee, but if someone had been below at the time they could have been seriously injured. While we hope to never be at that severe of a sailing angle again in the future, we will definitely be putting some effort into ensuring that we don’t create flying projectiles in our cabins. New cabinet latches, additional tie-downs, and drawer stops are all in order to say the least.

We spent the next 2 hours or so out on the water motoring to stay out of the storm’s path down the coast. It certainly wasn’t the best day on the water that we’ve ever had, but we know that it could have been a lot worse. We were glad for the opportunity to test out our electronics and sails, which all worked great, and to find the problems that still need to be addressed in a (relatively) safe environment. We made it safely back to our home dock without damage to our boat or the crew, had a (mostly) good day on the water, and learned a lot in the process.