Learning to sail, the easy way 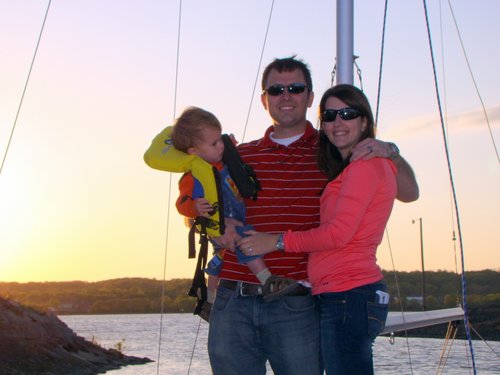 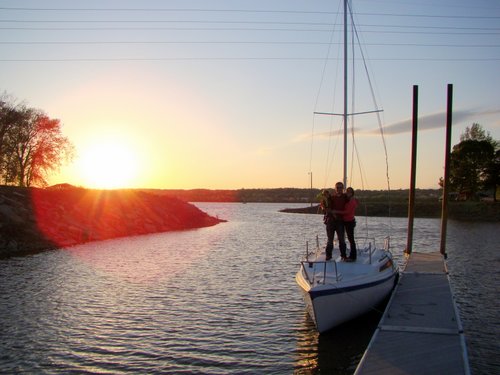 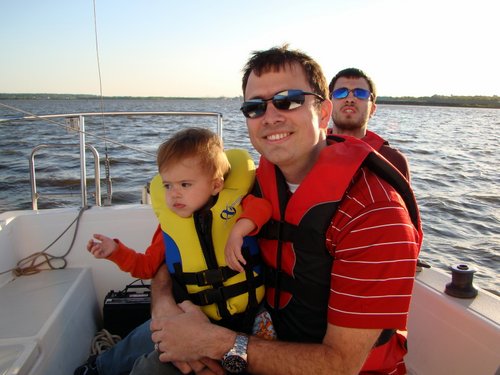 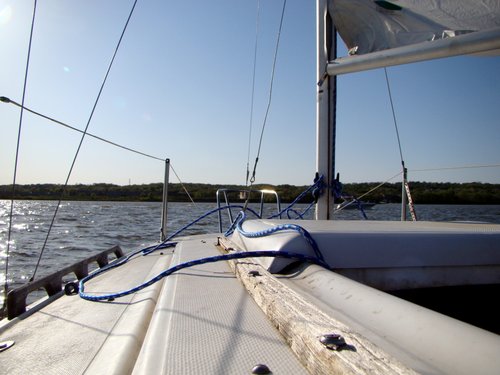 So our most recent learning to sail expedition started out exceptionally poorly. We had just lowered our boat into the water and tied her off. Kyle was parking the Jeep while I was loading the boat with our toolbox (you never know) and other doomsday supplies and Carter was chilling on the bench beside Michele. The winch handle was chilling beside Carter. Carter has recently learned how to throw things, hes actually a pretty good shot for a 16 month old. While Michele turns to me and in the split second she isn’t directly looking at Carter (before you blow up and call child services, we all had life jackets on and Michele had a hand on Carter), he decides it would be a good idea to chuck the winch handle into the river. Now the winch handle is chilling (literally, the water is around 55°F) under 7 feet of Chicago sewer run off (Illinois River). After much debate and consternation, it is voted that I shall be the one to retrieve the handle. Oh joy. A change into swim wear, 15 minutes of hypothermia inducing water, and the winch handle is retrieved. Not a good beginning for our second voyage. If we want to sail around the world, we have to start somewhere.

Some of you have hopefully read my too-funny-to-be-true story about my first venture into the world of sailing the high seas (or the Illinois River)… Everything that went wrong last time went right this time. Not exaggerating. Learning to sail the easy way indeed. We were a little nervous about our new motor, it being a trolling motor and all. That little champ had no problems moving our 25 footer around the harbor and out into the open ocean (river). Once we cleared the mouth of the harbor we were able to successfully point our bow to wind. No windex though, that was a casualty of the last excursion. Bow pointed to wind, it was almost trivial to hoist the main, lower the keel, and sail up wind. Yes, I sailed up wind. In a boat. I was beginning to write off as sailor’s salty stories the tails of beating to wind for hours. Last time, I couldn’t point within 30 degrees of the wind. But it happened this time.

The wind was around 10 knots according to the weather man, but it was more like 3 knots gusting to 14 knots. This made it quite difficult to tack for us newbies when the wind was at 3 knots. We ended up cheating (only a little, mind you) and using the motor to help swing our bow through the wind. During the gusts it was another story. Being a sailor of but two voyages, I didn’t expect the boat to make any noises (and maybe it isn’t supposed to). When we were pointed approximately 40-45 degrees off wind the boat would begin to hum. At first we thought we had hit ground, but we were moving far too fast to be dragging our keel. Then we noticed that the boat only made the sound when we were pointed windward as much as possible. I still don’t know if that is supposed to happen or if I narrowly escaped my boat exploding.

For the return leg of the journey Kyle took the tiller and we sailed at a run back to home port. What took us an hour and a half into wind took around 20-30 minutes returning. We were able to lower the main and motor into the harbor like we knew what we were doing, which we didn’t. All in all it was a more successful voyage than I could have hoped for, especially after the previous debacle/attempt at wind powered locomotion. We are following our dreams. It may be baby steps at a time, but it is comforting and exhilarating knowing that we are moving in the right direction.