“How would you carry a laundry machine up a mountain?” This intriguing question was part of a Scrubba Washbag commercial that made me take a closer look. I had been looking for a solution for laundry on board, but hadn’t made up my mind on what I wanted to try as my first manual washing experience. Our friends on Cool Beans showed us their preferred method, essentially a modified plunger in a bucket, which probably would have been what I tried first if I hadn’t seen the Scrubba on a facebook group called Women Who Sail. I liked the idea of the smaller footprint of the Scrubba bag and thought it might be better for us due to our limited space. When Dan spotted it on a Woot.com sale, I decided to take the plunge. The bag folds up quite small when you aren’t using it.

First of all, let me say that the price point is a bit high in my opinion. At $55 for what is essentially a 3 gallon dry bag with some bumps inside, it took me some serious consideration before I decided to buy it. Even after using it, I’d still say the price could have been a bit cheaper but it is fairly new so it may go down in price in the future, especially since it has already come down $10 since I first looked at buying it. Since I ordered it from Woot.com, I can’t say much about the customer service directly from the company or their shipping time, though they do offer free shipping to anywhere in the United States and internationally I believe. 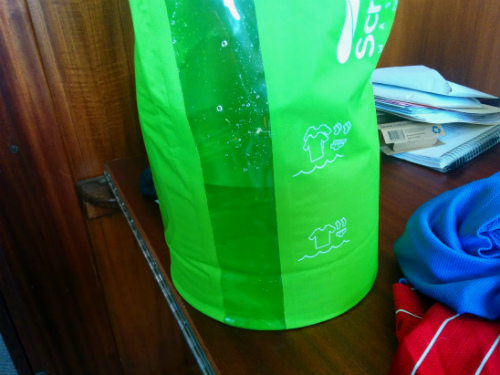 It was easy to tell how full to fill the bag.

The packaging was totally rage free and user friendly, which is always nice. My first impression was that the material was a bit thinner than I had expected but it still seemed pretty sturdy. After using it for multiple large loads, it held up with no problems though I was still careful not to use my fingernails too much when massaging/washing the clothes. The overall appearance is pleasant and I especially liked the clear window on the side with water-fill suggestions for load size. I will say that the air vent (very similar to one on a beach ball) was almost impossible for me to function but Dan had no problem getting it to work, so it’s either a hand strength issue or a brain issue I’m not quite sure at this point. Let’s just say I will never do this much laundry at one time again!

The actual washing process was pretty straight forward. I had a full week and a half of laundry to do (3 people with Dan’s work and casual clothes) and I will say that I would not under any circumstances recommend doing that much with the Scrubba at one time. On the up side, I was able to get a very good handle on how much of different kinds of clothes could fit in one washing load. It really could fit more than I had anticipated and should not take too long for a normal wash load of a few days at a time. Here is a sample of some of the loads that I did: The Scrubba could hold a decent amount at one time while still getting everything clean. 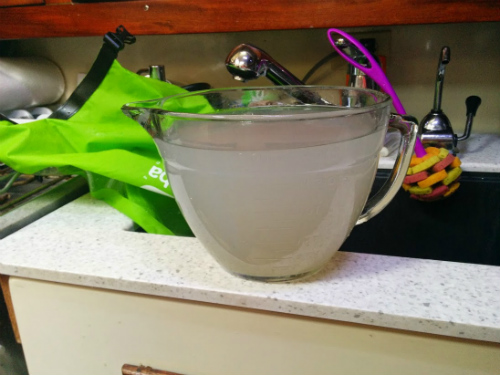 The dirty water from just one load. It certainly is getting the clothes clean! 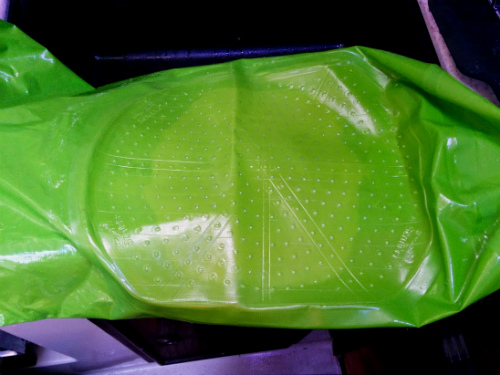 Here is the inside of the bag. You can see how the wash board would be different than a normal dry bag.

The cleaning power of having the washboard inside the bag was also very helpful. At least of few of the pieces I washed had visible dirt/stains on them before washing but afterwards came out clean (I did spray them with a bit of Spray n’ Wash first). If you had anything that was heavy soiled, it would probably be better to do a pre-rinse of that item first just to reduce the transfer of oil or other junk onto your other clothes or the inside of the bag. The official recommendation for soap used is basically any washing liquid (as opposed to powders) and even shampoo or body wash would work in a pinch. I chose to use a dye and chemical free liquid that I got at Costco since I figured that some of the soap would be staying in our clothes without an intense rinse and spin cycle like you would have in a washing machine. You only need a very small amount for each load and I found that putting in the detergent before the water worked best for getting it to suds quickly. 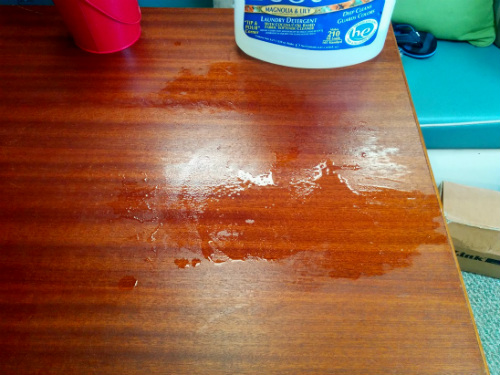 This is our salon table after washing a load. Not a lot of water left over, but enough that I wouldn’t do it on the bed or carpet.

All-in-all I’d say that the Scrubba was easy to use, well made, and good for use on a boat (or other traveling) due to its compact size and only using about 1.5-2 gallons of water per load.

There are a few caveats, however. First, due to there being a lot of water transfer going on, I would not recommend doing your washing on top of a bed or carpet area as there is some water that will get on your work surface. Nothing too drastic but just something to know ahead of time. Also, even with hand wringing the clothes are still very wet compared to an electric machine. The guys at Scrubba sell a microfiber towel to roll/squeeze the water out in and I would highly recommend using something similar if you want your clothes to dry in any reasonable amount of time. Or you can do your own version of a spin cycle by doing the windmill on the back of your boat, your choice.

Have you had any experience with a manual clothes washing system that you would recommend? Tips or tricks for us? Let us know in the comments!