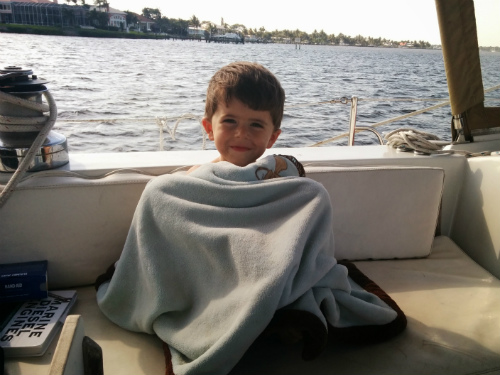 Carter is quickly becoming climatized, it was 85 degrees in this picture!

Even with our bad luck on a Friday, Dan and I still decided to leave for Stuart after lunch that day. We really wanted to be able to reach Lantana before Monday when Dan’s new job would start, especially since we had already dropped off one of our cars there on Thursday night. We prepared ourselves (again) to leave and shoved off with some help from the marina worker. As the boat started reversing, however, Dan quickly realized that he had underestimated the power of prop-walk when reversing a large boat. While we had read about it before, we had never experienced the effects ourselves and so were not really prepared for how to deal with it properly. Dan quickly adjusted his plan for getting out of the marina safely and got us into the canal, but we realized that we were going to have problems at the end of the day getting the boat stern-to the dock. 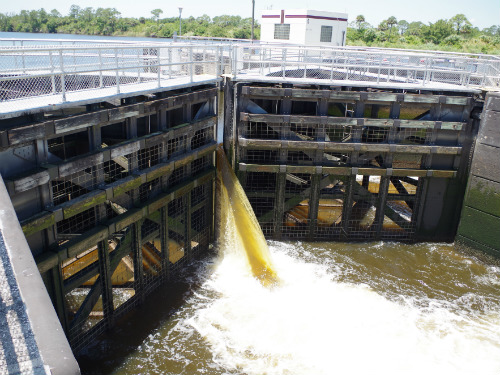 Before we could worry about that we had the locks to transit. As we got within approximately a mile from the locks, we radioed in to let them know we were coming. We were somewhat surprised when the reply was a sarcastic “I can’t see you yet.” Apparently, at the St. Lucie Locks they won’t even respond to information until you are within sight of the operator. Luckily, everything still went quite smooth once we got into the locks as we had hoped when watching the previous day. The only negative about going through the locks was the dramatic decrease in wind when you are inside. The drop in wind and requirement that everyone be wearing life-jackets made for a very hot crew, as we haven’t yet purchased the inflatable PFD’s. After that experience, we certainly can understand why the inflatable kind are so much more desirable. 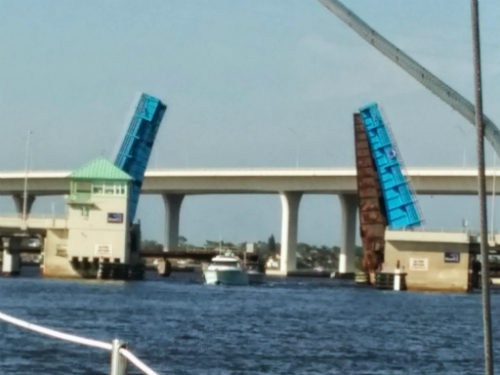 The view coming up to the Roosevelt bridge

The next obstacle we had was the Roosevelt drawbridge that we had to go through. According to bridge schedules online, the bridge opened every half hour on Monday-Friday. As we were getting close to the bridge, we thought we would have about a 20 minute wait until the next opening, so Dan slowed us down quite a bit in order to come to the bridge right at the opening time. About the time that we were coming into full slight of the bridge, we could hear over the VHF radio another boat requesting the bridge to be opened. The operator responded that he could open it but that a train would be coming through soon and he didn’t have control of when the secondary train bridge would close. We had no idea we could’ve just requested the bridge to be opened and we definitely didn’t want to wait for the train, so Dan threw the throttle down to try to beat the clock. We radioed the operator to let him know we were coming and he assured us he would keep his bridge open for us but again warned that he had no control over the train bridge, but it “wasn’t moving yet”.

Let me just say that you should never be in a hurry on a sailboat. Even going as fast as our engine would push us, we were definitely moving at less than 10 miles an hour. Some people joke that taking a sailboat around the world would be faster if you just walked and I can see that they weren’t entirely kidding. In any case, we got past as the lights started to flash announcing the imminent closing of the train bridge. We could now see our home for the evening but still had to figure out how to come into it safely. We had to pass the marina by a fair amount before turning back towards it to stay in the channel; we definitely didn’t want to bottom out after a long day.

As we came around the corner of the docks to get to our assigned slip, we had a moment of panic. The time had come to park the boat, and we were in the inside corner with boats all around…no room to maneuver at all. Amazingly, there were people walking down the docks near our slip who asked if we needed help docking and we accepted. With their help and the help of our new next-door (next-slip?) neighbors, we were able to wrangle the boat into the slip and get her all tied down. Our first journey had come to an end with no damage to life or property. I’d call that a success.