Categories Menu
Home » Preparation Stage » How To Defeat the Leak

How To Defeat the Leak 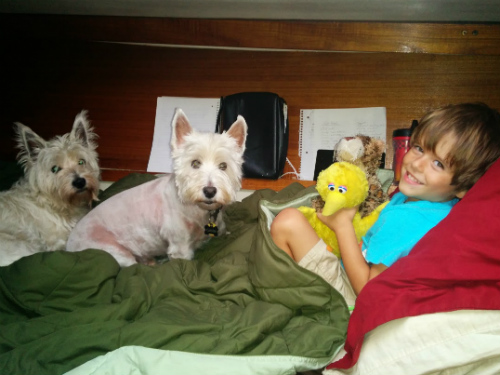 Nothing better than spending a rainy day snuggling in a warm, dry bed

At some point or another, most of us have had to deal with having a small leak in our home or business. A window or even a roof dripping a bit during a flooding spell in springtime is cause for a check up and a few buckets, but not any real concern for most people. Not so on a boat. A primal fear is awakened when you find yourself on a leaking boat in bad weather, even if you clearly are in no danger of sinking or drowning or in fact any horrible fate at all other than a few sopping beach towels lying around and some wrinkled book pages.

Our first big rainstorm on the boat happened just a week or so after moving aboard. Dan was working and I was attempting to turn a very foreign space into our home. As the heavy rain started to fall and the boat began to sway on our dock lines, I started to hear the tell-tale sound of dripping, something I had (naively) never considered when moving aboard. My heart started to beat faster but I decided that the most logical thing to do was to find the leak and write it down so that I could tell Dan about it when he got home in an hour or two. And thus began the hunt, me with my flashlight and notebook scouring every inch of cabinet, hatch and window, all the while becoming more and more panicked as 1 leak become 2, and then 3, and then 10. After my final count of around 15 of so separate dripping areas, I finally sat down on our settee with my face in my hands and sobbed. What had I gotten myself into?

Luckily, Dan had no such fears of our leaking boat and went immediately to work checking out the problem once he had assured me that our boat was, of course, not in danger of sinking. Nearly 6 months later, I’m quite dry while writing this post during a lovely wet spell to say that we’ve finally located and eliminated all of those leaks (for now at least), though we weren’t able to completely accomplish that feat until just a week or two ago. It is amazing how difficult it can be to locate the source of a leak on a rolling object, especially one in which you can rarely see the direct underside of the deck.  Now that we are leak free however, the boat feels like a totally different place in a storm; a cozy refuge for our family rather than a derelict tent.

A few things that we have learned through the process of finding our many water intrusions:

Hopefully, you’ll find that you look forward to getting out of the rain when you get home, rather than spending the night in it!