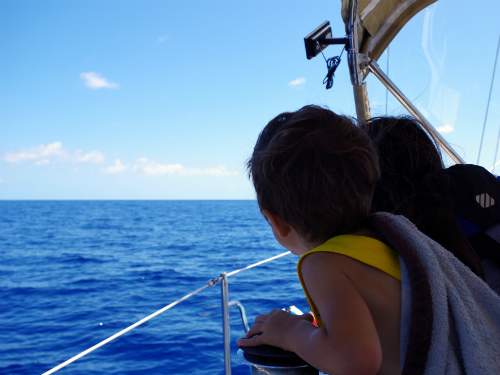 Our first sighting of Bimini after a long day on the water.

“Land ho!” Dan called to Carter and I as we neared the end of our Gulf Stream Crossing. As we completed the final few miles of our day, it felt as if a huge weight had lifted off of our shoulders. The stunningly clear waters of the Bahamas greeted us after our first “major” crossing and what a reward it was! As I stood on the bowsprit coming into the Bimini channel I called back to Dan that I could see the bottom to which he responded, “We’re still in 80 feet of water!” 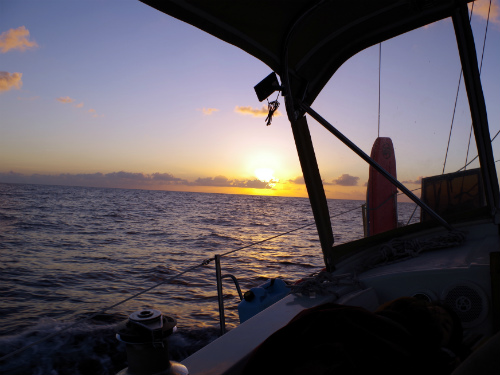 The beautiful sunrise over the Gulf Stream

Our morning started early due to a night full of wakes from power boats going in and out of No Name Harbor. When we both realized the other was awake at 3 am, we decided to pull up the anchor and head out rather than try to go back to sleep for only another 2 hours. Conditions were somewhat rocky going out of Cape Florida with waves at 3-5 ft at around a 4 second period, but once we got onto the ocean everything smoothed out quickly. Thankfully we had a rather uneventful crossing… a good thing! 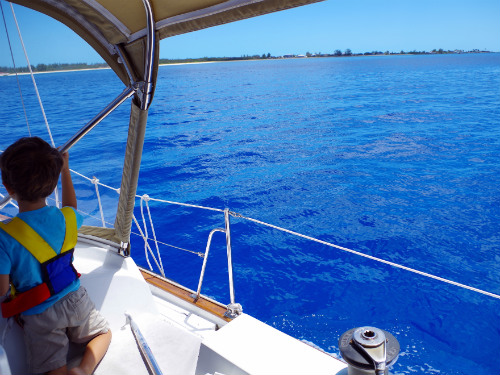 The beautiful waters of the Bahamas, just look at that blue!

The most excitement (other than the morning 5ft waves) was a few container ships that would have come rather close. We were able to call them on the radio by name thanks to our AIS receiver and ensure that we would stay out of their way… one even changed course for us because we called them early enough. The ship was more than 7 miles away from us but our AIS had calculated that in around 25 minutes they would been less than half a mile from us… AIS is truly an amazing safety technology. Dan radioed this information to the ship’s captain and the ship graciously turned a few degrees off course to change our closest approach to over 5 miles. All in all, our trip took about 9 ½ hours from No Name Harbor to Bimini. 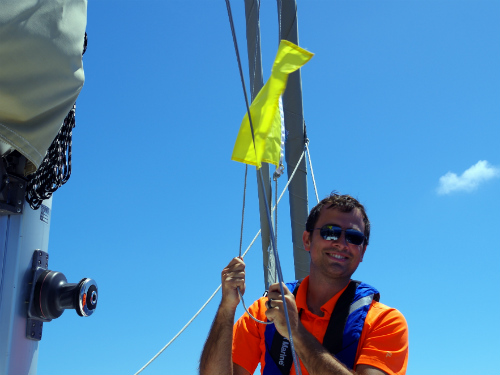 We decided to stay at Bimini Sands Marina on South Bimini to avoid the strong current along Alice Town. The marina has a nice large basin that is very easy to get into and is well protected from any wind and waves. The marina staff called the bus for Dan clear in at the airport customs station on South Bimini and I was pleasantly surprised by how quickly he was able to get back with all of our paperwork completed. With the official issues taken care of, we are happy to start our adventures in the Bahamas!

Would you like to see more photos of our trip? Check out our Flickr page to see the ones that don’t make it into our posts!