Our Bout with Davy Jones 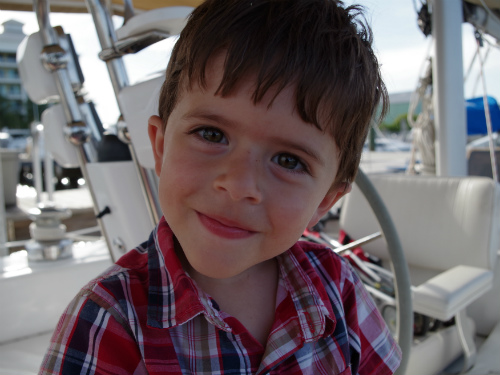 Don’t let that innocent smile fool you, this is the face of a master of destruction

Living on the water comes with the inherent risk of losing items to the drink. I just didn’t realize that it was more an inevitability than risk until we moved on board with a three year old and two dogs. Never mind my natural capacity for not paying enough attention to my surroundings (see Getting Our Sea Legs). 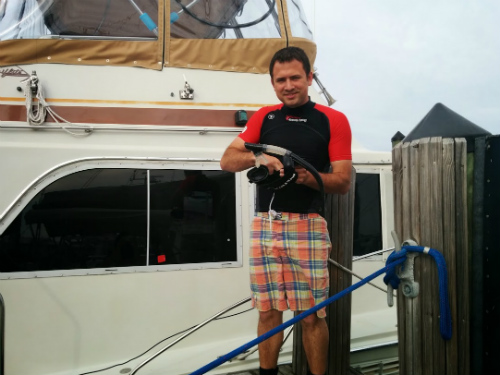 Can you tell he’s excited about searching the mud for my keys?

One of the first rules that Dan instituted was “Never have your keys in your hand when getting on and off of the boat.” Alas, he knew me too well. One morning while Dan was at work, I was in the process of getting myself, Carter, and a large bag of laundry off of the boat. As I swung the bag of laundry onto the dock, I released the bag safely…and my car keys right into the water. I was honestly in shock and just stared at the ripples for a few moments before I could even think about anything. Our dock neighbor Gary, who I mentioned in the First Taste of the Cruising Community, graciously attempted to find my keys in the near zero visibility water but wasn’t able to locate them. Now I had to wait for Dan to get home and tell him that I had, in fact, done what he always told me not to do and that now he would have to dive in the disgusting water to find my keys. He only gave me a small “I told you so” and was able to find my keys, along with those of another unfortunate boater from the past. 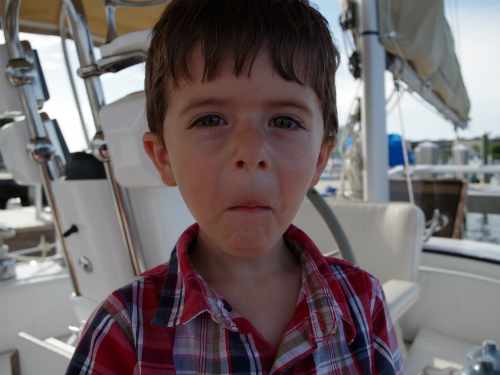 On our first day in Lantana, the water and I had a rough time together. It was a beautiful day and so I allowed Carter and the dogs to stay out in the cockpit while I made lunch for us down below. I regularly checked on Carter and would find him looking out and the water or petting the dogs. All was well…or so I thought. What Carter was actually doing was taking every loose item in the cockpit and throwing them overboard one by one to see if they would float. This included our hose nozzle, the dogs’ 2 leashes and water dish. 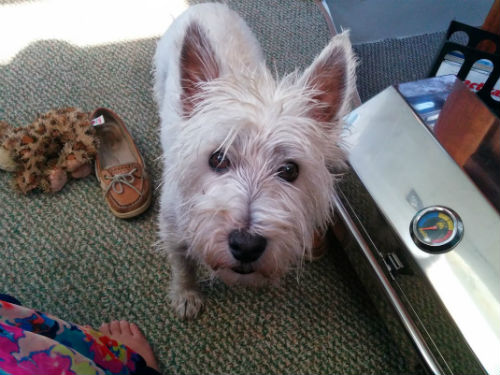 Gavin after his little “swim” and bath. He had a rough day.

I was so angry I could hardly see straight, so I sent Carter to his room before I overreacted and went back to making lunch. That’s when I heard a very strange noise from outside. I went into the cockpit to investigate and found only Winston topside looking straight down off of the transom at the water. Gavin had attempted to jump onto the dock to catch some landing ducks and, as his coordination is about as advanced as mine, fell straight into the water. I quickly climbed down the dock ladder and called him over to me as he sloppily dog-paddled his way around the boat. I’m sure the two of us would have been quite the sight to see as I had to get in waist deep to hoist him out as he flailed desperately trying to get out of the water, which he hates. He was none too happy with me as I had to spray him down with fresh water again. At least I was able to rescue my shoe!

Our current tally is as follows:

I think that makes the score Davey Jones 6: Us 1: Tie 4. We’re hoping to even the score with some fishing and lobster diving in the near future.