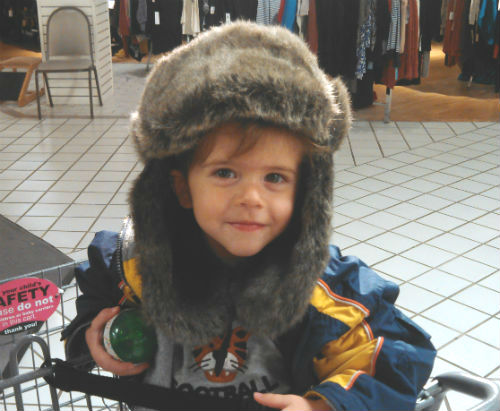 Carter at the store with his green bouncy ball

As you may have noticed, we have a two year old little boy in our house. And like pretty much all little boys, he loves to play with balls of all kinds. We also have a terrier named Winston who loves to play with balls of all kinds, and who believes that every ball in existence belongs to him. I think you may begin to see the conflict arising. A couple of days ago, Carter found a light up bouncy ball in one of our cars that he had dropped months ago and was very excited to play with it. So, he started playing with his newly rediscovered ball and then left it on the floor abandoned a few minutes later.

Abandoned balls quickly get claimed by Winston. And so it was that when Carter and I returned to the room some time later, the big green bouncy ball had been reduced to a plastic ball surrounded by a pile of green rubber. I almost started crying when I saw the heartbroken look on Carter’s face as we went to pick up his ball and showed it to me. “Mommy, my ball broten.” (that’s broken) All I could think to respond was, “I’m sorry honey, Winston ruined it.”

As I began to clean up the remnants of the sparkly rubber, I noticed that Carter had started pulling the last pieces off of the plastic light-up center. When he had finished picking them all off, he held the ball up to me and said, “Look Mommy, now it’s a rolly ball”, and proceeded to roll it around the room just as happy as he had been a few minutes ago watching it bounce off the walls. I was completely amazed and to be honest a little ashamed of myself. My 2 year old had a lot more imagination then I did when faced with a problem that hadn’t gone the way he wanted. All it took was a little perspective.