The year 2014 will go undoubtedly be ranked among the most significant of our lives. This was the year that all of our planning and saving culminated in moving 1,000 miles onto our own Irwin 37. Though at times we experienced incredible stress and frustration, there were far more moments of joy, excitement, and true wonder at our new life. We look back on this year with a great feeling of accomplishment, knowing that so many have never reached such a tangible realization of their dreams.

It is with that knowledge that we head into 2015, having faith that what is to come will be greater still. We hope that you will join us as we continue to Follow the Horizon. 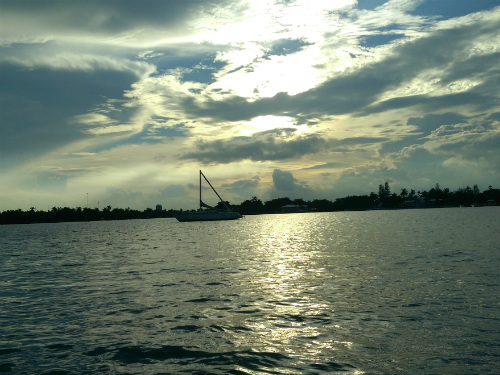 This boat was recently dismasted in an accident involving a drawbridge. I’m sure that’s not exactly the dream that the captain imagined.

Dan and I are not cut out to be live-aboards. And by that I mean living on a boat in a metro area while working full time. Over the last few months, both of us started to become increasingly disillusioned with our dream of cruising and even started discussing what we might do after cruising was over (something that is decidedly not on a set time-line).  We are living in a tiny space with 2 and a half people and 2 dogs, fighting crazy traffic every time we try to go anywhere, Dan working worse hours than anytime in his career, 2,000 miles away from close friends and family, and our marina rent is the same price that we were paying for our mortgage, taxes, and insurance on our pre-downsized house! Conclusion: live-aboard city life is definitely not for us.

It’s easy to see why we might be slightly disappointed. However, when we recently purchased a cruising guide for the Bahamas and started planning the beginnings of our trip for this winter, suddenly a huge light bulb turned on. The reason why both of us had been feeling so discouraged was because we had subconsciously equated our current living arrangements with the dream we had been working and saving towards for the last three years, when the goal was still just around the corner! We want to get away from big cities and stressed out, high-speed life, so it makes perfect sense why we weren’t exactly feeling like we’d found ourselves in Paradise yet.

Now that we’ve realized what was causing some of our uncertainty about cruising, we’re able to move forward with our plans for this winter. The more that we read about and plan for actual cruising, the more energized we’re becoming again. A lot of our biggest projects stopping us from leaving are getting wrapped up and the official hurricane season will soon be over. Let’s just say that we’re getting to the point where the To-Do list is partially getting smaller due to completion and partially due to us making strategic decisions like “new cushions or leaving sooner…screw the cushions they’re fine.” Hopefully sometime soon we’ll be rounding that corner into the final stretch before heading out!

When Did That Happen? He was definitely more concerned with the cupcake than the candle!

Something about time changes when you have a child. As soon as we started telling people that I was pregnant, other parents began the warnings: “Watch out, he’ll be graduating high school before you know it” and “My baby just had a baby” and “Don’t blink, you might miss it.” While we did believe those people and tried to take their advice to heart, I don’t think that anyone can truly appreciate the speed at which a child changes until you have experienced it for yourself.

Carter turned three years old today and it has taken me somewhat by surprise. Suddenly, I don’t have a baby any more but a little boy with an active imagination, active feet, and a very active opinion. I truly don’t miss the “baby stage” (especially the diapers, yay for potty training!) but I have a much greater appreciation for what a precious commodity his childhood truly is for us. It also gives me a stronger sense of urgency to get out of the daily grind so Dan and I can fully experience this time with Carter. Not many families will have the opportunity to have both parents home full time with their child and it is a privilege we are working very hard toward.

In the next few months we are planning to wrap up our loose ends at home and start the very serious business of finding a boat for our adventure. We are hoping to be ready for full time cruising by the end of next year’s hurricane season and while 11-12 months sounds like a long time to some, we know better. We have a relatively short time to get a lot done, but we are so ready for the challenge. The wait is finally nearing an end and for that we are truly thankful.

Happy Thanksgiving to you and a Happy Birthday to our little boy! A lot can change in a year.

We are stuck in a moment of anticipation. Wound tight like a spring preparing to release and just waiting for the trigger to be pulled. The jetliner full of people sitting on the tarmac while someone changes out the light bulb. The senior class two weeks before graduation. We are so ready to start our new life that we ache with the tension of waiting. And yet here we sit in our holding pattern, day after day after day wondering what are we still doing here?

At our current rate of savings, Dan and I will be preparing to quit our jobs in just about one year from now. One more year of rolling out of bed every morning knowing that this is not where we want to be. One more year of watching Carter change from a toddler into a little boy. While logically we know that one year will move so quickly that we will feel rushed and surprised when it finally comes time to take the plunge, right now every day is an internal struggle between “we have a great plan” and “just do it, we’ll survive”.

In the meantime, we’re trying to keep busy and check items off of our to-do lists. Home repairs, SCUBA certifications, and potty training are all on the docket for the next few months. We’re doing our best to savor the things that we won’t have when we leave, while also slowly untying the lines that hold us here. Each day that passes brings us ever closer to our dream and we want to be ready when the time comes. That being said, if anyone out there has a fully stocked cruising boat for 3 that you’d like to get rid of for $10,000 or less just let us know, I’m sure we could find someone to take it off of your hands.