How to Make a Boat Bed 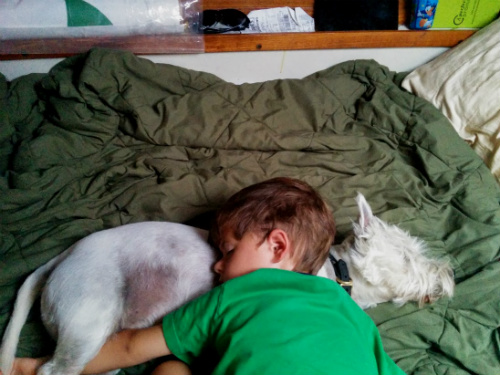 With two dogs and a little boy, sleeping is a favorite activity on board.

Getting a good night’s sleep is one of the most basic living comforts and one of the most noticeable when it is missing. Making our master stateroom bed on Horizon into a restful space has been an ongoing project for me from the first day we moved on-board. When most people think about making a bed, they probably think sheets and pillows. For us it has run the gauntlet of improving the rock hard cushion mattress, sewing our own sheets and eventually making a V-berth capstone cushion (also called an insert cushion.) For this post I’ll be covering how we updated our mattress and my many attempts at sheet making. The v-berth cushion I’ll cover more in depth on a future post about using a Sailrite machine. 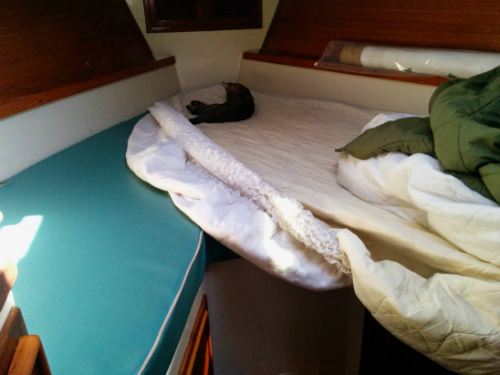 The original mattress cushions were quite uncomfortable and hard to make!

Within only a week or two of moving on board, Dan and I were both waking up feeling 30 years older every morning. Our backs were aching, hips and knees were acting up and both of us felt generally immobile when we got out of bed. We knew that we could not continue sleeping on 3 inch high density foam or else we were likely to start developing spinal problems! Our first plan was to buy a full 10 inch memory foam mattress and cut it to fit, but after discussing it with some fellow live aboards, we decided to try a 3 inch memory foam topper from Costco first instead. At just over $100 for the king size we figured it was worth trying before shelling out significantly more for a full mattress. 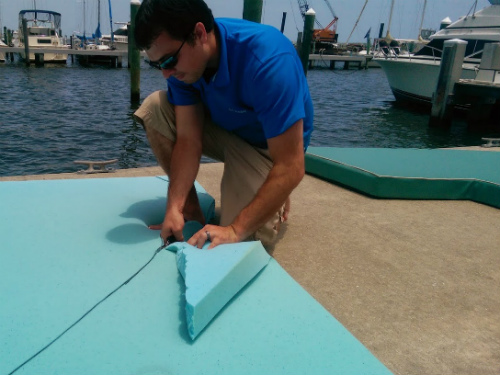 Doing the cuts out on the dock gave us a lot more work space.

We brought the topper home and opened up the box. As it began to expand inside the boat (the foam is vacuum packed inside the packaging to reduce its size) we realized that there was really no way to properly measure without some significant floor space. So out on the dock we went with our new topper, our old mattress, a permanent marker and some scissors. In our case, our v-berth is slightly wider at the head than a standard king size mattress so we had to do some creative cutting to have enough foam to cover the whole space. We ended up with three pieces: one for the main body of the bed, and one for each of the head pieces. Using our kitchen shears and razor blade for cutting the foam worked marginally well, but most people I talked to said an electric knife is the best bet and I tend to believe that would have been a much cleaner option. 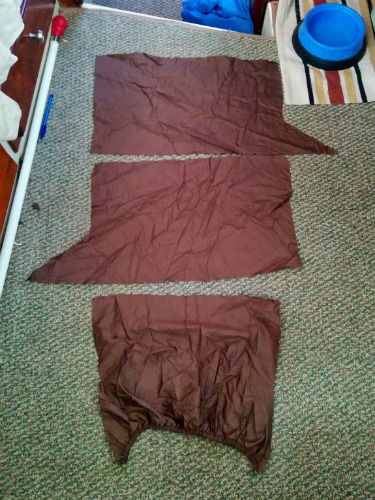 To make the insert portion, I made pieces that had to be inverted.

The sheets were not such an easy fix. Our problem was that without a capstone cushion our v-berth couldn’t even use specialized v-berth sheets; they would have to be custom. After a few failed attempts at cutting and tucking standard king sheets, I decided that I would have to take a more active approach. I brought a standard sewing machine with us when we moved onto Horizon and even though I am a fairly novice seamstress, I was going to do whatever it took to have a decent looking set of sheets. (Including buying the cheapest sheets at Walmart just in case it was a total failure!) My first step was cutting a thin triangle out of each side of the fitted sheet and then sewing the sides back together in order to have a tighter fit around the bottom (pointy) part of the mattress. After many attempts, the sheets finally fit!

Then came the tricky part. In order to make the inside u-shape I cut a straight edge around the top of the mattress, then cut inverted shapes to act as the sides and bottom of the mattress. In the end, the sheets turned out fairly well and have held up to the abuse that the three of us have inflicted over the last 5 months. The only other addition we’ve made is some sheet suspenders to help the sheets from sliding out from under the slippery mattress. Our bed is now soft, comfortable, and looks nice too!